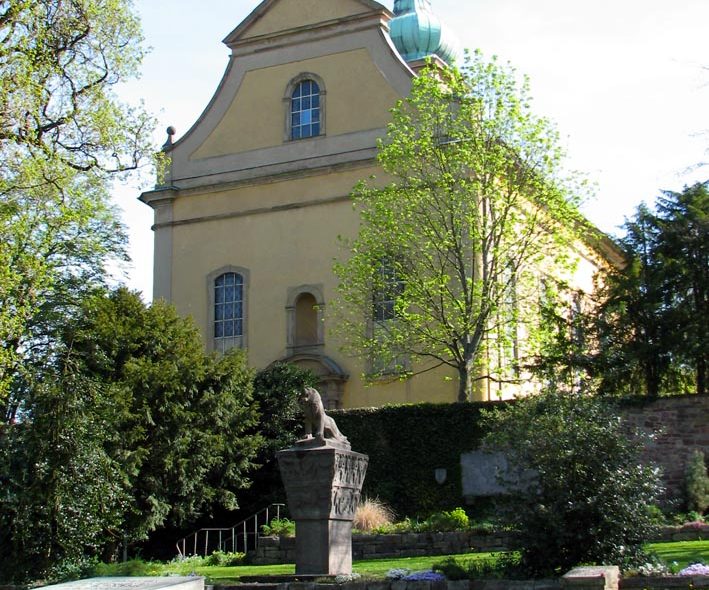 Already in 1348 the Marian Chapel was mentioned for the first time demonstrably. In 1413, the only bell of the church tower was built. Since the 16th century, the Chapel of Our Lady has been the destination of pilgrimages. The steadily increasing number of pilgrims led to the construction of two side chapels from 1680 onwards. These were rebuilt over time and finally demolished in 1840 on the orders of the Royal Government. The architect Balthasar Neumann was commissioned with a new building of the lady chapel, which the Neustadter Benedikt Lux built with altar and pulpit in the years 1734 to 1738. In 1744, the new Chapel of Our Lady was inaugurated. In 1847 the chapel was restored for the first time, with the statue of The Virgin Mary of the church tower being re-gilded, and in 1887 a renovation of the high altar and the side altars by the sculptor Valentin Weidner followed. In 1906, the tower was restored and expanded in baroque style. In 1975, further renovations took place in the interior. Since 2002, the lady chapel has been one of the stations of the franconian path of Our Lady. The chapel of Our Lady includes the neighbouring chapel cemetery, which was also mentioned in 1348. The cemetery was extended for the first time in 1855. In 1866, due to its strategic location between Bad Kissingen and Nüdlingen, or Winkels (today a district of Bad Kissingen), the cemetery became a battlefield in the Austro-Prussian War. Most of the war victims were also buried here directly in the cemetery, or in a mass grave nearby. The crucifix next to the Marian Chapel made of sandstone was built in the 18th century. It stands on a wide table base with a relief representation of the sleeping Christ Child. Both the chapel and the cemetery are important witnesses of the history of Bad Kissingen due to their long history. During a tour of the cemetery, which is like the lady chapel one of Bavaria's registered monuments, there are countless graves whose inscriptions and equipment tell of the burial cult of past centuries. The richly decorated lady chapel with its idyllic location directly on Lake Liebfrauensee is also a lively address for weddings and other occasions with locals and guests.
Contact
Kapellenstr. 17
97688 Bad Kissingen
Show route
https://www.katholischekirchebadkissingen.de/gemeinden#marienkapelle